Venus flytrap ( Dionaea muscipula) is an extremely popular houseplant found throughout the US and is now endangered in the wild. Many people buy them since they are among the very few carnivore species in the world and eat unwanted insects. Moreover, it is a visually very attractive and quite durable perennial plant.

Venus flytrap is the famous carnivorous plant, most well-known for capturing and eating prey. The plant’s stems typically span between 8-12 inches, with leaves ranging from 3 to 6 inches long. These leaves are what make the Venus flytrap so well-known.

The spines on these leaves catch and swallow insects when their prey activates the pressure-sensitive hairs within its lobes and mouth. The lobes shut over the victim in just half a second. The plant produces the red sap to digest its food for 10 days, and the lobes are then reopened. 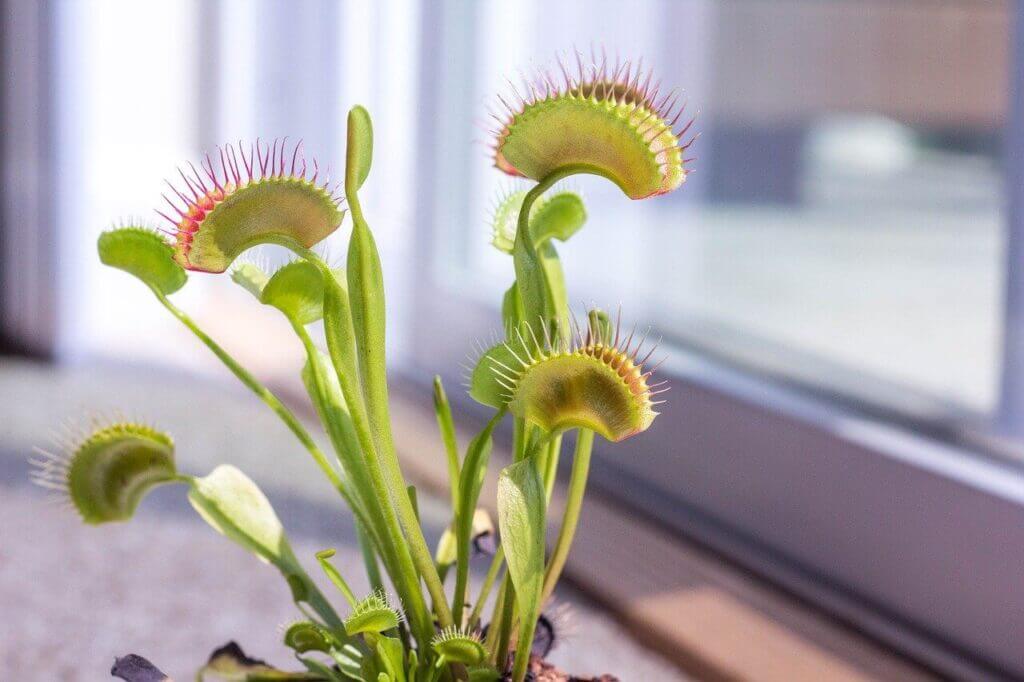 Venus flytrap is a strange plant that loves strange things. It differs from other non-carnivorous relatives and, consequently, is misunderstood most of the time. When people notice a drooping Venus flytrap plant, they think that it is sick and overcompensates by adding water or nutrients, which eventually causes the plant to die. In such a case, we recommend ensuring that the area it is in has adequate light and humidity.

Here is a list of the most important care tips that you need to take to maintain your plant’s health.

Venus flytraps love sunlight and thrive best in sunny places. Make sure to put your Venus flytrap plant in direct sunlight for at least six hours every day. If possible, give over 10 hours of sunshine.

You can plant it indoors, but it will be difficult because of their high light demands. You can use artificial lighting in indoor areas, such as fluorescent lights or LEDs of cool colors.

Water the Venus flytrap plant with pure water like rainwater, distilled water, or reverse osmosis (RO) water. Don’t use tap water or bottled water as it could contain significant minerals that cause death to Venus flytraps.

Ensure to water your Venus flytraps regularly to ensure that the soil is moist but not saturated. The ground should not dry out since Venus flytraps are prone to suffering in dry conditions. Apply pressure to the soil using your finger after watering, and make sure the ground is not wet but not over-saturated to avoid overwatering.

Venus flytraps must go for dormancy each year. If they don’t go through the dormancy phase for several years in succession, they will begin dying.

It enters dormancy when exposed to a temperature lower than 45°F for some time. They will remain cool for longer than three months. It requires exposure to cold temperatures for three to five months to finish a dormancy.

If the weather is not kind enough to allow the Venus flytraps to rest naturally, you should consider using the refrigerator dormancy technique.

We recommend using carnivorous plant material for your Venus flytrap. Many nurseries, as well as online retailers, offer pre-made carnivorous soil for plants. You can create carnivorous plant soil by combining peat or sphagnum moss with perlite and sand. Make sure to change the potting soil every year to prevent mineral build-up.

Beware of using clay, terracotta, or unglazed ceramic pot for the Venus flytrap plant. They release minerals to the soil, which can be harmful to the plant. Make sure to choose pots with drainage holes to prevent rotting. 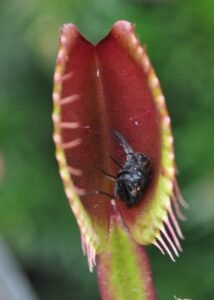 Venus flytraps love eating bugs. To survive, they have to catch bugs; however, consistent feeding boosts their natural growth.

Keep your flytrap plant outside in the backyard garden to allow insects to eat by themselves. If you have an indoor plant, make sure to feed it once, every 3 to 6 weeks. Feeding your plant just one bug each month could make a massive difference to the plant’s vegetative growth.

Venus flytraps do not require terrariums for growth. Terrariums are highly detrimental to Venus flytraps, hindering sunlight and limiting airflow. They prevent the plant from capturing insects and can cause rotting problems.

The only advantage of growing the Venus Flytraps inside terrariums is high humidity. However, you can get high levels of moisture obtained through regular misting with a humidifier.

Check out details about How to Start Your Home Garden.

Why Is My Venus Fly Trap Wilting or Drooping? 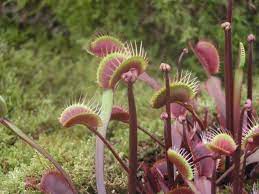 Carnivorous plants love plenty of sunlight. Venus flytrap thrives well in full sunlight, and in the absence of enough sun, it starts to wilt. About 6-12 hours of sunshine in a day is ideal for the growth of the Venus flytrap plant. It does not grow well indoors as it may not receive enough sunlight there.

Do not overlook that Venus flytraps have a dormant period during which water the plant less. The time frame is usually between November and the close of February. During this time, temperatures decrease, which means that the Venus flytrap will appear wilted and lose its traps.

This is not unusual. Your Venus flytrap will begin growing and flourishing after the winter season ends!

Reason 2: Use of Wrong soil mixture

One of the significant reasons Venus flytrap plants start wilting and dying is using the wrong soil mixture. Venus flytraps grow naturally in nutrient-deficient soil. It compensates for this by eating various insects.

Be sure not to apply any heavy nutrient-rich fertilizers to the potting soil of the Venus flytrap plant. It loves acidic soil with a pH lower than 7. It grows naturally in damp soil around fens and swamps. It grows well in plenty of sunlight and open spaces with fresh air.

The ideal fertile soil to use for the Venus flytrap plant is a mixture of sand and peat in the ratio of 50:50 or 1/3 sand and 1/3 peat moss. Parts of peat moss 4:1 to perlite is another good alternative.

If your home does not contain any perlite, you could also use sphagnum moss. You can also use two of them in a row and mix them. While selecting peat moss, ensure no lime or fertilizers, twigs, and excessively long sphagnum fibers.

Reason 3: Use of Mineral water

If you water your Venus flytrap with the wrong kind of water, it could cause it to shrink, wilt and eventually die. It will only prosper when fed with low mineral salts.

If water is excessively rich in salts of minerals, they’ll build up in the soil and eventually kill the Venus flytrap. The minerals cause root rot, and finally, the plant dies.

So make sure to not water your Venus flytrap by using mineral water, bottled, or tap water. Instead, use rainwater or distilled water and reverse-osmosis water (RO) or demineralized water.

Most carnivorous plants, including Venus flytrap, love a constant water supply to flourish. If the soil of your Venus flytrap plant is dry between the watering intervals, it will begin to wilt.

Make sure that the pot has good water drainage. Choose a pot with drainage holes for proper drainage. Be sure to keep watering your Venus flytrap plant as soon the soil begins to dry or become slightly damp. Do not let it dry completely.

Your wilted Venus flytrap could also be a victim of diseases and pests. If not taken right care at the right time, they can eventually cause the death of the plant.

The most frequent pests that attack Venus flytraps include spider mites, aphids, and fungus. Due to humid and wet conditions, black spots or fungi are widespread. To combat this, you require to treat your plant with a fungicide. To combat spider mites and aphids, use miticides, insecticides, or even flea collars.

Venus Fly Traps flourish naturally in nutrient-deficient soil. If the plant does not receive sufficient nutrients, it will wilt. However, it is not usually a problem since it catches its food, i.e., bugs in and around. When your flytrap plant is indoors, and you don’t see it taking anything, assist it by throwing a bug into the trap to get food.

Beware of fertilizing it with fertilizer during this time. The plant takes approximately one week to digest the food of an insect.

After bringing it to your home, Venus Fly Trap might start to droop or wilt. This happens because of it being exposed to different conditions.

Your flytrap plant could take some time to adapt to different lighting amounts, watering, and soil. It may even enter winter dormancy. Be aware that plants may appear utterly dead following exposure to extremely low temperatures in winter.

So be vigilant about your Venus flytrap plant, as it may revive. Trim black traps to allow your plant to conserve energy to grow.

Check out details about How to Start Your Home Garden.

How to Take Care of the Venus Flytrap?

The first step in ensuring a healthy Venus flytrap plant is to take preventive measures. Since the plant is native to bogs, it is crucial to maintain extremely high humidity around them. If your Venus flytrap plant seems to be drooping or getting discolored, it may be due to the difficulties in replicating the conditions at home.

The plant loves direct sunlight and adores poor soil, as their natural habitats contain soil with a high content of peat as well as sand. Most people at home utilize a mix of sphagnum moss, peat, and sand. So it is vital only to provide distilled or mineral-free water to Venus flytrap.

Why the Traps of Venus Flytrap Don’t Open or Close?

A common complaint that many face when it comes to taking care of the Venus trap is a trap closed without food or ceased to close. In most cases, the proper Venus flytrap care can ensure that the plants continue to feed on bugs, but only to a limit.

Before the trap doesn’t close, every trap in the plant devours prey around three or four times. The trap then dies and is replaced by another, bigger trap. Therefore, it’s crucial to keep this in mind when thinking about Venus flytrap treatment.

In the same way, perennials are in a state of dormancy in winter. It lasts for about three months. During this time, the majority of the plant dies in the winter, with only a few leaves or maybe even the root. Many people toss out the plant in this situation.

Instead, you should take care of your Venus flytrap by reducing the temperature to 45° F or less. It can be achieved by using plastic wrapping to ensure that it is free of insects and fungi even if it is kept in the store or garage to maintain temperature. Be sure to only water it lightly since too much water could cause it to turn brown.

You’ve got questions?
Our agri-professionals have answers.

For queries
write to us at: [email protected]

Check out other posts

Advertise your Agribusiness with us!

You can place your adverts either as Banner Adverts, Sponsored posts or Product Reviews on AGRIKULTURE TODAY. Contact us at [email protected] for more.